History of sculpture, starting with Rodin up to the present. In 1950, the city of Antwerp organized a successful international open-air sculpture exhibition in Middelheim Park. As a result, the expansive park became a permanent venue for creative beauty in the form of sculptures. After 50 years of collecting, the park now prides itself with an impressive collection of modern sculptures.

The Middelheim Museum collection includes approximately 400 works of art. Every year sees new works added to the collection. Around 215 sculptures have been placed in the park, including works by major artists such as Auguste Rodin, Rik Wouters, Henry Moore, Juan Muñoz, Carl Andre, Panamarenko, Franz West, Erwin Wurm and many others.

Each year, the museum invites contemporary artists to engage in an artistic dialogue with the permanent collection and the park environment, resulting in high-profile performances and impressive exhibitions by well-known artists as well as promising younger ones. These new works are frequently included in the permanent collection. Roman Signer and Ai Weiwei have also recently created new works specifically for the museum.

Renaat Braem, one of Belgian’s best-known 20th century architects, designed the beautiful pavilion in 1971. It has recently been refurbished and forms a pleasing synergy with the park. The Belgian artist Philippe Van Snick created the extraordinary fountain in front of the pavilion. The Braem Pavilion is reserved for the fragile showpieces of the permanent collection, and works by well-known artists such as Alberto Giacometti, Jean Arp, Wim Delvoye and many others receive the attention and care they deserve. The Braem Pavilion exhibition changes twice each year.

Starting at the Braem Pavilion, a 750 metre corridor runs through the park, past the Middelheim Castle and over the Middelheimlaan to Hortiflora, a flower garden that was formerly part of the Nachtegalen Park until its inclusion in the Middelheim Museum in 2012. The open-air museum now covers no fewer than 30 hectares of park and exhibition space. Three exhibitions are hosted annually in and around the exhibition pavilion ‘Het Huis’, which was designed by Robbrecht and Daem.

The Middelheim collection has been expanded with a collection pavilion.  It has been designed as an open depot with a changing layout where you can become acquainted with unknown or lesser known works of art.   This means work that may be too fragile to show in the open air can also be exhibited.

The collection has been put together over a period of six years and mainly consists of small sculptures, fragile terracotta or wax sculptures, or works in other sensitive materials.   Works from Giacometti, Trampedach, Rosso, Piccinini, Gentils, Köllwitz, Lohaus, De Bruyckere, Chetwynd, Deacon, Zadkine and others are displayed in a simple, functional way, sometimes completely and at other times partially unpacked. 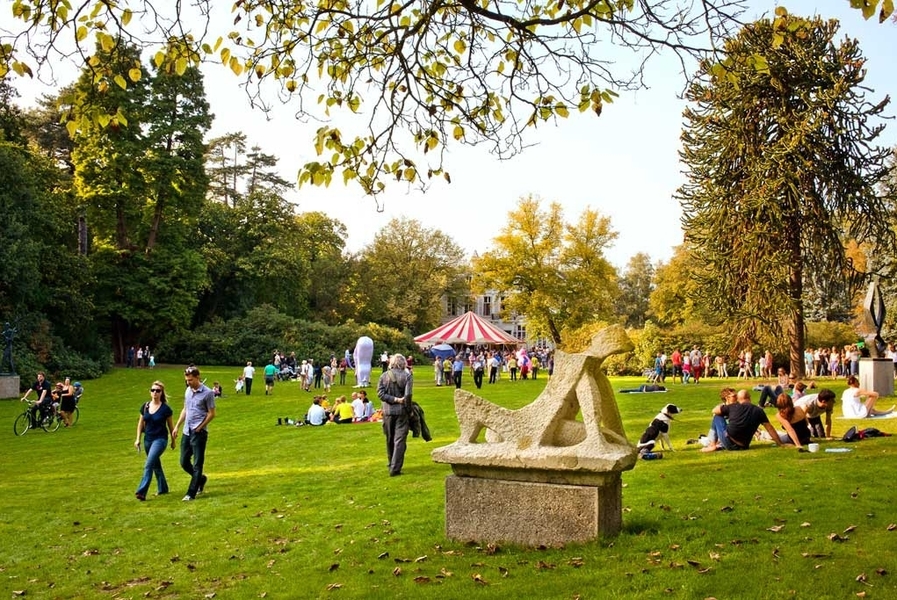